THE SUBLETTE COUNTY OUTFITTERS & GUIDES ASSOCIATION is ready to help you plan a memorable hunting trip.
Sublette County is home of the World Record Shiras Moose and a consistent trophy book entry area for all other species. Fifteen of the Wyoming’s twenty two elk feed grounds are located in Sublette County, which assure a good number of elk during hunting season each year.

Elk
Sublette County continues to produce some of the best Trophies and the highest Bull:Cow ratios in the state. We are very fortunate to have 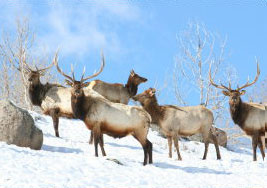 exceptional elk quality and a great season to hunt them. If you hunt with us, you will see that we are one of only a few places in the United States where you can hunt elk with a rifle right in the midst of the rut, during the peak of the bugling season. We are also fortunate to have resident herds of elk to hunt and are not dependent upon migrational habits. The archery season will generally be in September with rifle seasons running from September through October, and cow elk seasons running to December.

entries in that category. Moose find the river bottoms to their liking, but may also be found at 9,000 feet or higher near a high mountain lake. In general, water is abundant in the area, providing moose with the habitat they need. Moose are commonly seen at most times of the year and even come into town. Our moose population has been in a building phase for the past five seasons. We are happy to report that the herd is in very good shape and we are again sighting some tremendous Bulls. Moose permits are obtained through a Preference Point System of drawing. It has been taking 3-4 years to draw that license, and you must apply each year on order to maintain your preference points. The trophy bulls are here when you draw your license – let us help with the process!

Bait hunts can be booked in either the spring or fall season, with the spring season, historically being the best. Sublette County has produced some extremely good Trophies.

Hunting lions with hounds can be one of the most

thrilling hunts that a person can experience. When a big tom track is cut and the first bawl of a hound is let out, the hair will stand up on the back of your neck and the blood will be rushing through your veins. The pursuit of these big cats could last for minutes, hours, or days, depending on if he’s traveling to a different country or just making a little circle hunting for a meal. We have a healthy population of lions with a lot of deep remote country to provide quality toms and producing females with offspring. Some outfitters offer 7-day, one-on-one hunts from the 10th of November to the 31st of March. Our lion seasons are on a quota. When so many lions are taken in an area, it will be closed until the following year.

We can produce that shot at that Trophy Buck for you. Extremely

good areas are available which produce a near 100% success rate. Seasons run from Sept. 7 through November 10. Due to the 2003 legislative action, we should see license drawings in the 90% range for the 2004 season.

Have you been looking for a Trophy Buck? Now is the time and Sublette County

is the place! The hunting will be early season, mostly high altitude, difficult hunting, but the bucks are here and we have the knowledge to produce a shot at them. Our deer have been in a building phase for the past five years. Although the total herd numbers still have some room for improvement, our Buck to doe ratios and the number of truly Trophy-type bucks have never been better. Hunts are conducted from Base or Spike Camps, or on a Day Use Basis from town. The season appears to be from mid-September through late October, with pre-season archery hunting. Licenses should be near 100% due to 2003 legislative changes.

Our outfitters also service other areas of Wyoming, producing the most unique of hunts for Trophy Muleys and Whitetails at the same time! Hunting may be on great private land and leases. Hunt during the RUT and experience extremely good success rates. Your choice between Whitetail or Muley Bucks.

which has the biggest winter herd of Rocky Mountain Bighorn Sheep in existence. Many of these sheep spend the Summer and Fall in the mountains of Sublette County. Sheep hunting can be one of the most physically demanding hunts of all the North American species. Being in the best physical condition a person can be, helps us assist you in getting a ram. Like most hunts, it can be easy or it can be the hardest hunt you have ever been on. Sheep are on a preference point system, so if you haven’t applied, don’t miss another year.